I’ve always loved chicken and turkey pot pie, likely because my mom does and she passed it on.  But I never made it myself, thinking it required a lot of fussing and that a turkey pot pie for one wasn’t terribly practical. I think it was the crust that scared me. However, I’ve started making more pies lately, since my brother has decided I am the designated holiday cook. And he really likes apple pie.

So, for Thanksgiving, I made an apple pie, and the turkey, and then grabbed the remaining crust scraps, as well as turkey leftovers, and took it all home.  The pie scraps (from the all-butter crust) made the perfect topping for this turkey pot pie.  The bones were the basis for homemade stock, and the leftover cooked turkey became part of the filling.  If you don’t have turkey stock and/or leftovers, use chicken instead.

I made my own crust and stock, but if you don’t have the time or inclination, store-bought will work just fine. If you can, get made in store stock, not the stuff in the can or box (it tastes better).  You could even get some cooked turkey from the deli counter. Then you have a semi-homemade dinner, without a lot of work.

Don’t be intimidated by the way, by the idea of making stock. It’s really easy. You just need bones (from turkey, chicken, beef or whatever kind of stock you want to make), water, salt and pepper, carrots, onions, and a bay leaf. Toss it all in a pot, bring to a boil, and then let it simmer for a couple of hours. I like to caramelize the bones and veggies in a bit of oil first, for more flavor.

I have adapted this from a Food Network recipe. I reduced the quantities and eliminated the celery and parsley.  If we were meant to eat celery, it would taste better and not get stuck in your teeth!

It takes about an hour overall, in two stages. First make the filling, then add that to a six inch casserole dish, top it with the crust, and bake until golden brown.

Turkey Pot Pie for One Person

by Jodi
Cuisine American Category Dinner Recipes for One Person

Use up those Thanksgiving leftovers with a delicious turkey pot pie. Make your own crust, or save the extra crust from a dessert pie.

* I used the scraps left over from making an apple pie for the holidays. If you have a prepared crust, cut it in half.

**You probably won’t need the whole egg. You can skip this if you like, or use the remaining egg for an omelette or frittata.

Turkey Pot Pie for One Variations and Substitutions 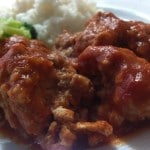 Sweet and Sour Turkey Meatballs with Jelly and Chili Sauce

Classic comfort food that’s grown up and gotten sophisticated. Spicier, and not as sweet. You may lick the plate (my dad did). 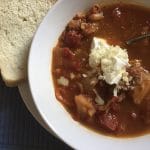 Use up that leftover holiday turkey with this south-of-the-border take on standard turkey soup. Tangy lime, spicy cayenne, and cool sour cream make the soup flavorful, rich, and satisfying. 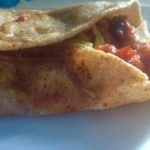 Earthy/spicy chipotle, and sweet tart cranberries combine for another Mexican-influenced treat. Use up the extra turkey, and the cranberry relish, all at once! 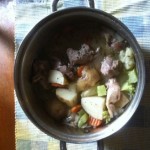 Haven’t got the ingredients for something? Improvise! Swap the veggies, fake some Herbs de Provence, add some Riesling, and simmer. Ta da! Soup!