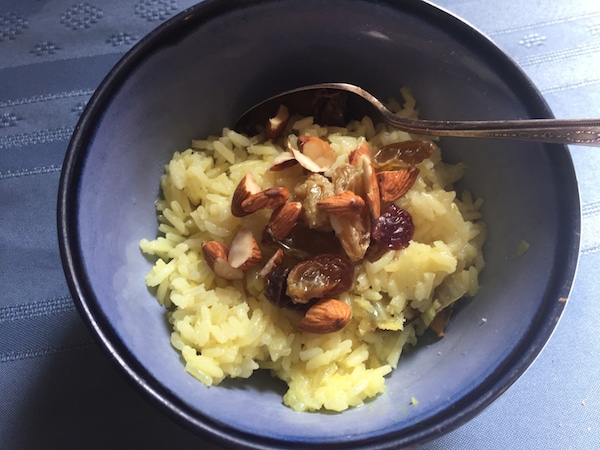 An online food group I belong to is celebrating “rice month.” The idea is to highlight a recipe featuring, well rice.  Someone suggested that nearly every culture uses rice so everyone ought to be able to find something to fit the theme.  Unfortunately, I come from a long line of noodle and dumpling people.  So, at first I was stumped.  What could I possibly make for this challenge?  Then I had an idea.  I could borrow a “sister” culture!  Eastern European Jewish people focus heavily on noodles, but the Sephardim (from Asia, India, the Middle East, etc.) have plenty of rice dishes.  So, I looked through my cookbooks and found garlic ginger turmeric rice.

It’s a Bene Israel recipe, meaning that it was created by the Jewish population in India.  You might almost call it a pulao. I’ve adapted this recipe from The Book of Jewish Food.  Her version served six.  Mine is about three servings (because extra rice is always good; more on that later).

This particular rice dish is packed with garlic, ginger, green cardamon pods, and a pinch of turmeric for that beautiful yellow color. It’s tasty (and it fights germs too, which made it even more appealing since I’m still fighting the creeping crud!).  Don’t be put off by all the garlic and the ginger, both start out spicy and sharp but mellow and become almost sweet as they cook.  The cardamom adds a complex taste; it’s a bit minty, with a hint of citrus and a spicy/warm flavor.  The original calls for basmati rice (which I didn’t have), but ordinary long grain white rice will do just as well. If you use the basmati rice, rinse it several times before starting to cook it.

by Jodi
Cuisine Indian Category Side Dish Recipes for One

A dish from the Bene Israel Jews of India. The rice is full of flavor from cardamom, garlic, and ginger, plus that deep yellow color from turmeric.  A nice change from plain rice.

*You can either leave the spices as is, and then make sure to pick them out of the rice when it's finished, or scoop them out into a tea ball. Then put the tea ball into the pot, and continue on with the rest of the recipe.

As is, this is a side dish. But with a bit of extra effort, it can become a main dish too.  There are a couple of ways to do this. For example, you could make it more substantial by cooking up some chicken or adding leftover pre-cooked chicken to the rice. Or, cook up some spinach and fry and egg (in the same pan if you want), and add that to the top.  You can do the same thing with the leftovers a few days. later. Instant food!

The recipe says that for special occasions, this dish was often served topped with blanched almonds and raisins. While this wasn’t a fancy occasion, I decided to do it anyway. I didn’t have blanched almonds, so I just roughly chopped a few whole ones.  Soak the raisins in water a bit before you use them, in order to soften them. 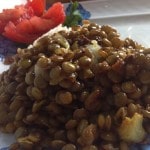 Super easy to make, and has a surprise ingredient you probably don’t expect.  Maybe not pretty, but healthy and tasty! And uses pantry ingredients too. 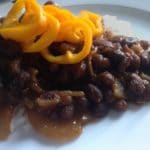 Black Beans and Rice Recipe for One Person

A complete meal (and complete protein too). I’ve adapted this from a Cuban-Colombian friend’s recipe.  It can also be adjusted to make soup!

Bring some heat with spicy lamb sausage from Morocco. Don’t worry, the carrots, eggplant, and sweet spices tone it down.